Mike Fletcher is a woodwind multi-instrumentalist, composer, arranger, writer and academic based between the UK and Spain. His music is primarily influenced by the melodic spontaneity of jazz, but also draws inspiration from folk, popular and contemporary classical fields.

During the first half of 2018 he will be appearing across Europe to promote his latest album Picasso(s), an experimental project for solo saxophone that draws on jazz and visual art. He has recently completed his PhD in composition at the Royal Birmingham Conservatoire in the UK.

Mike is first and foremost a saxophonist and he most commonly performs on this instrument, either as the leader of one of his own projects – the Mike Fletcher Trio, Cuarteto Español, Mike Fletcher Jazz Orchestra – or as a sideman with ensembles including the Olie Brice Quintet, the flamenco-jazz Cuarteto Majao or Jonathan Silk Big Band. In 2015 he was nominated by Birmingham Symphony Hall to participate in the ECHO Rising Stars programme, and in 2013 was chosen by the BBC to represent the UK as lead alto with the European Jazz Orchestra.

The Mike Fletcher Trio album Vuelta was released on Stoney Lane Records in 2015, and the Fletcher/Brice/Jozwiak record Nick Of Time on Slam Productions in 2014. He has also recorded with notable contemporary jazz leaders such as Tony Bianco and Paul Dunmall.

As a composer, Mike works across genres from jazz, contemporary classical to theatre and film. In 2017 he composed and conducted the music for the Royal Shakespeare Company’s production of Dido, Queen of Carthage – described as ‘one of the most beautiful scores…at the RSC for a very long time.’ In 2013 he was commissioned by Jazzlines/THSH to write and perform a suite of music as part of a celebration of the work of Steve Reich. His large ensemble music has been performed by soloists such as Lee Konitz, Andrew D’Angelo and Dan Weiss. He is the director in residence with the Clasijazz Big Band S&F, based in Almeria, Spain. In this capacity he has worked with jazz luminaries such as Benny Golson, Barry Harris and Lee Konitz.

In addition to his music, Mike is also a writer and post-doctoral academic researcher affiliated with the Royal Birmingham Conservatoire in the UK. He has delivered papers at numerous conferences in the UK and Europe, and has a number of publications, including chapters in edited collections published by Routledge and Leuven University Press.

Mike’s interest in music began in the family home – his parent’s love of jazz, classical and folk music infected him from an early age. After beginning by studying piano at age 6, and cello at age 8, he finally took up the saxophone at age 14. By 16 he was performing professionally, touring the UK and Europe with the Midland Youth Jazz Orchestra before going on to study jazz performance at the Birmingham Conservatoire, graduating in 2005. He has since returned to the same institution where he completed his PhD in 2018 and now works as a post-doctoral researcher. 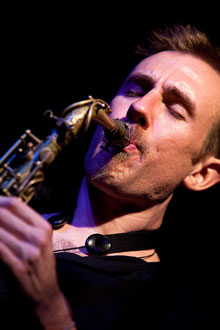